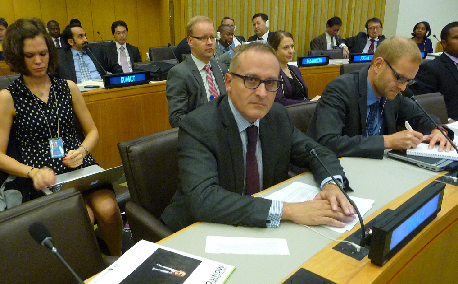 My delegation would like to congratulate you on your appointment as Chairman.

France aligns itself with the statement delivered on behalf of the European Union. I would like to add the following remarks on behalf of France.

This year was marked by major successes for the international community but also by new, inacceptable developments.

The adoption of the Arms Trade Treaty (ATT) in April was a historic step forward for international law. In our sector, it’s the first major treaty adopted within the United Nations since 1996. This is the best illustration of the effective multilateralism that France calls for. Universal standards to govern legitimate trade and prevent illicit trafficking have at last been approved. They will help strengthen international peace and security. They make international humanitarian law and international human rights law central to the criteria the States Parties are committed to abiding by. They will help combat effectively the illicit spread of conventional weapons worldwide, thus combating terrorist groups and organized crime.

It is now essential to move more quickly towards universalization of this Treaty. In France, the parliamentary ratification procedure is under way.

The implementation of the Treaty is also a key issue ahead of us. France is prepared to cooperate with all the States Parties. The Secretariat provided for by the Treaty will need to be set up quickly. Several criteria will have to guide the choice of headquarters: the presence of disarmament and arms control expertise, the presence of expertise in international humanitarian law and human rights, and the proximity of operational organizations. Geneva fully meets all these criteria.

The Chemical Weapons Convention Review Conference in April was another major success which should be welcomed.

2) But at the same time as the 188 States Parties to the Chemical Weapons Convention adopted an ambitious report by consensus, that barbaric weapon, banned for a century by international law, was used in Syria.

The use in Syria of a weapon of mass destruction by a government against its own people is intolerable. The firm and determined reaction of several countries, including France, permitted the adoption of the OPCW Executive Council decision on 27 September and UN Security Council Resolution 2118. That Resolution clearly condemns the chemical attack of 21 August. It refuses impunity and calls for those responsible to be tried. It acknowledges the existence of a threat to international peace and security and imposes important, legally binding decisions, with a view to destroying Syria’s chemical weapons stocks. It also decided that the Security Council, in case of non-compliance, would impose new measures under Chapter VII.

The massacre committed using chemical weapons on 21 August is terrifying. But we must not forget the other sufferings of the Syrian people, and the other violations of international humanitarian law, including using other unacceptable weapons such as cluster bombs and, according to certain allegations, incendiary weapons.

3) Nuclear proliferation has also brought its share of bad news.

Another nuclear test was carried out by North Korea in February. This test was a serious act and a major threat to international peace and security. It is also, following a long-range missile launch on 12 December 2012, a new, unacceptable violation by North Korea of its international obligations. These acts were condemned in UN Security Council Resolutions 2087 and 2094. Pyongyang must end this escalation and its warmongering rhetoric.

The Iranian proliferation crisis naturally remains a central concern for us.

The new report by the Director General of the IAEA confirms once again the violation by this country of its obligations under the resolutions of the IAEA Board of Governors and the UN Security Council. Its stock of enriched uranium, including uranium enriched to more than 20%, is still growing, and its heavy water activities continue. The declarations of Iran’s new President mark, we hope, an overture. The French President met him two weeks ago, here in New York. He informed him of our availability for dialogue, but also of our firmness on nuclear proliferation. We are awaiting concrete gestures to restore confidence, showing that Iran is truly prepared to address the expectations of the international community.

Lastly, France continues to hope that full light will be shed on Syria’s past or present nuclear activities. We regret that the IAEA has had to postpone indefinitely a verification mission in 2013 and we call upon Syria to allow this inspection mission as soon as possible.

4) We must look to the future and address its challenges. An important debate has emerged in recent months on the issue of Lethal Autonomous Robots (LARS). This is a key debate as it raises the fundamental question of the place of Man in the decision to use lethal force. It is also a difficult debate, as it highlights many ethical, legal and technical issues. It covers technologies which are not yet fully developed and which are dual-use. The terms of this debate need to be clarified. To be useful and allow progress, this discussion needs to be held in an appropriate disarmament forum, combining the necessary military, legal and technical expertise and all the States concerned.

The Nuclear Non-Proliferation Treaty is the keystone of nuclear disarmament and non-proliferation. The Action Plan adopted by consensus in 2010 is our roadmap. It is important to implement this roadmap and to keep to it, without deviating from the chosen route.

This naturally means that nuclear-weapon-States must be equal to their commitments, and France is aware of its responsibilities as a nuclear-weapon-State. With our P5 partners and at national level, we are working in this direction. I will have an opportunity to return to this point in more detail during the nuclear issues debate, but we all know France’s exemplary record on nuclear disarmament. It is a record of acts, not words. I will name a few notable examples to keep to a few key facts which speak for themselves: the irreversible dismantling of our nuclear test site and of our fissile material production facilities; the disarmament of the land component of our deterrent; and the reduction by one third of both our submarine and air deterrent components.

But the roadmap decided by the 2010 NPT Action Plan is also a common approach that commits all the States Parties: the “step-by-step” approach. It is also a sequence for multilateral action, with the entry into force of the Comprehensive Nuclear Test Ban Treaty (CTBT) and the launch of negotiations on the Fissile Material Cut-off Treaty (FMCT). This is a logical sequence.

To undermine the priority accorded to negotiating the FMCT would be to deviate from the route laid out in the 2010 roadmap. It would thus risk wasting more time.

6) Last year, my country strove to warn this Assembly of the probable consequences of certain initiatives which created parallel forums. We can only observe that this achieved only, as we feared, the reopening of discussion on the step-by-step approach and the next negotiating priority. In the end, it endangers the NPT Action Plan roadmap of 2010.

7) France is naturally aware of the grave consequences that the use of nuclear weapons could cause. It is on the strength of this conviction that it has never participated in any arms race, that it applies the principle of strict sufficiency and that it maintains its arsenal at the lowest possible level, compatible with the strategic context. The French deterrent is strictly defensive. It is precisely because its sole aim is to protect our vital interest and because its use would be conceivable only in extreme self-defence circumstances, a right that is enshrined in the United Nations Charter, that the French deterrent is in no way contrary to international law.

8) Please permit me to finish by affirming my country’s commitment to UNIDIR, an integral part of the machinery of disarmament. France, which is traditionally the author of the five-yearly resolution on UNIDIR, is committed to the independence of the Institute and its mode of governance based on the Secretary-General’s Advisory Board on Disarmament Matters. It is essential that UNIDIR can continue its activities while maintaining its independence, as established by SSOD-1 and confirmed by Resolution 65/87.