The Political Agreement for Peace and Reconciliation is the only path to lasting peace in CAR and while progress has already been made, significant challenges remain. The armed groups must stop violating their commitments, the guarantors of the agreement must implement its measures, including the sanctions provided for in Article 35 of the peace agreement. Justice must be rendered to the victims. The international community, and in particular the countries of the region, must continue to support the implementation of that agreement in a coordinated manner..”

Political and security situation: from the crisis to the implementation of the Political Agreement for Peace and Reconciliation in CAR

The Central African Republic has experienced a major political and security crisis from December 2012. An offensive launched from the north-east by the "Séléka " rebel coalition led to the conclusion of the Libreville Agreement on 11 January 2013, establishing a transition period led by a Government of National Unity. Arguing that President François Bozizé (in power since 2003) had failed to respect the agreement, the Séléka took Bangui on 24 March 2013 and Michel Djotodia, head of the coalition, was proclaimed Head of State of the transition. His inability to stop the spiral of violence between his armed elements and the anti-Balaka movement, which had emerged in reaction to the Séléka advance, led to his resignation on 10 January 2014, on the occasion of an extraordinary summit of the Economic Community of Central African States (ECCAS) held in Ndjamena, Chad.

On 20 January 2014, Catherine Samba-Panza, Mayor of Bangui, was elected Head of the Transitional State by the National Transitional Council. The main task of the transitional authorities was to organize free and transparent elections, which took place between December 2015 and March 2016. The elections resulted in the adoption of a new constitution establishing a semi-presidential regime, limiting the number of consecutive terms of office to two, a non-revisable provision, and with enhanced decentralization. They also led to the election, on 14 February 2016, of President Faustin-Archange Touadéra with 63% of the votes, and to the election of deputies to the National Assembly.

However, armed groups continued to control a large part of the Central African territory and the security situation remained fragile with continued human rights violations and a deterioration in the humanitarian situation (attack on a camp for displaced persons in Alindao in November 2018, clashes between the UPC and MINUSCA in Bambari in January 2019). Faced with this situation, a Joint Roadmap for Peace and Reconciliation was signed on 17 July 2017 in Libreville (Gabon) between the Central African authorities and the African Union, as well as by Gabon, Angola, Congo-Brazzaville and Chad, ECCAS and the International Conference on the Great Lakes Region (ICGLR), and the African Initiative for Peace and Reconciliation in CAR, led by the African Union, was launched in order to reach a comprehensive political agreement between the Central African government and the armed groups.

After more than 18 months of talks, a peace agreement - the Political Agreement for Peace and Reconciliation in CAR - was signed on 6 February 2019 in Bangui between the Central African government and the 14 armed groups that signed the Libreville roadmap, following negotiations in Khartoum, Sudan, in January 2019 in the framework of the African Peace Initiative, under the auspices of the African Union and with the support of the United Nations. The agreement, the eighth signed since 2012, provided for the establishment of an inclusive government, decentralization measures and civil service reform, as requested by the armed groups. The armed groups committed themselves to an immediate cessation of violence, to disband, to facilitate the redeployment of state services throughout the country and to participate in the demobilization, disarmament, reintegration and repatriation (DDRR) process. Measures for the economic and social reintegration of former combatants were also planned. Finally, the agreement rejected the idea of impunity with the establishment of a transitional justice mechanism with the creation of a Truth, Justice, Reparation and Reconciliation Commission.

As provided for in the agreement, President Touadéra appointed an inclusive government on 4 March 2019. Its composition was strongly denounced by the armed groups, which considered that the place given to them (8 ministers out of 36) was insufficient. Following consultations held in Addis Ababa (18-20 March 2019) under the aegis of the African Union, President Touadéra formed a new Government on 22 March 2019: Firmin Ngrebada remained Prime Minister; the former armed groups were given a greater place in the Government (12 ministers) and obtained 12 posts in the senior civil service, the Presidency of the Republic and the Prime Minister’s Office, as well as 5 sub-prefect posts. The implementation of the peace agreement continued with the set up of mechanisms to monitor the implementation of the agreement, the continuation of the DDRR process, the establishment of the first special joint security unit in Bouar in October 2019, and the adoption by the National Assembly in February 2020 of laws on the Truth, Justice, Reparation and Reconciliation Commission, on political parties and the status of the opposition, on the status of former heads of state, and on the code of territorial authorities. However, many challenges remain in the implementation of the peace agreement, including the fulfilment of the commitments made by armed groups under the agreement.

International engagement in the Central African Republic: from MISCA to MINUSCA

In December 2013, the Security Council adopted resolution 2127 (2013) authorizing the deployment of the African Union-led International Mission in Support of the Central African Republic (MISCA) and the French operation Sangaris, in order to curb the escalation of violence.

This force was replaced in September 2014 by the United Nations Integrated Multidimensional Mission, MINUSCA, following the adoption in April 2014 of Security Council resolution 2149 (2014) at France’s initiative.

MINUSCA’s initial mandate was to protect civilians and support the political process, including support for reconciliation efforts, the demobilization of armed groups, security sector reform and the fight against impunity. With the political process pursued by President Touadéra since his election, MINUSCA has refocused its robust mandate on the strategic objective of reducing the presence of armed groups and the threat they pose to CAR. Following the increase in the troop ceiling of 900 military personnel authorized by Security Council resolution 2387 (2017), 13,730 uniformed personnel (11,650 military personnel and 2,080 police officers) are currently deployedas part of MINUSCA. On 13 December 2018, the Security Council adopted resolution 2448 (2018) renewing the mandate of UNMISSA for one year, despite Russia and China abstentions.

On 15 November 2019, the Security Council adopted resolution 2499 (2019) renewing the mandate of MINUSCA for one year. This resolution maintains the format and robust mandate of MINUSCA as well as its main missions: protection of civilians against the threat of armed groups; good offices and support for the political process; facilitation of the delivery of humanitarian assistance; support for the gradual redeployment of the Central African armed forces, etc. It also authorizes MINUSCA to continue its support for the implementation of the peace agreement and to support the preparation and holding of the presidential and legislative elections of 2020/2021.

The European Union also supports the stabilization of CAR and the restructuring of the Central African armed forces. It did so first with the deployment of the European military mission EUFOR-RCA in April 2014, whose mission was to support the securing of the capital Bangui and which ended in March 2015. Since July 2016, the European Union has deployed the EUTM-RCA mission for strategic advice and operational training of the Central African armed forces. At France’s request, the EU Foreign Affairs Council of 15 October 2018 agreed to establish a civilian component to the EUTM-RCA Mission (known as "EUTM +") with some 15 personnel with the aim of providing advice on civil-military cooperation, including to the Ministry of the Interior and the Gendarmerie. The current mandate of the EUTM-RCA Mission runs until 19 September 2020. Since 2016, the EUTM-RCA Mission has trained more than 4,000 Central African Republic military personnel.

France continues to support MINUSCA capacity-building so that it can have all the necessary means to contribute to the stabilization of CAR and support the political process. 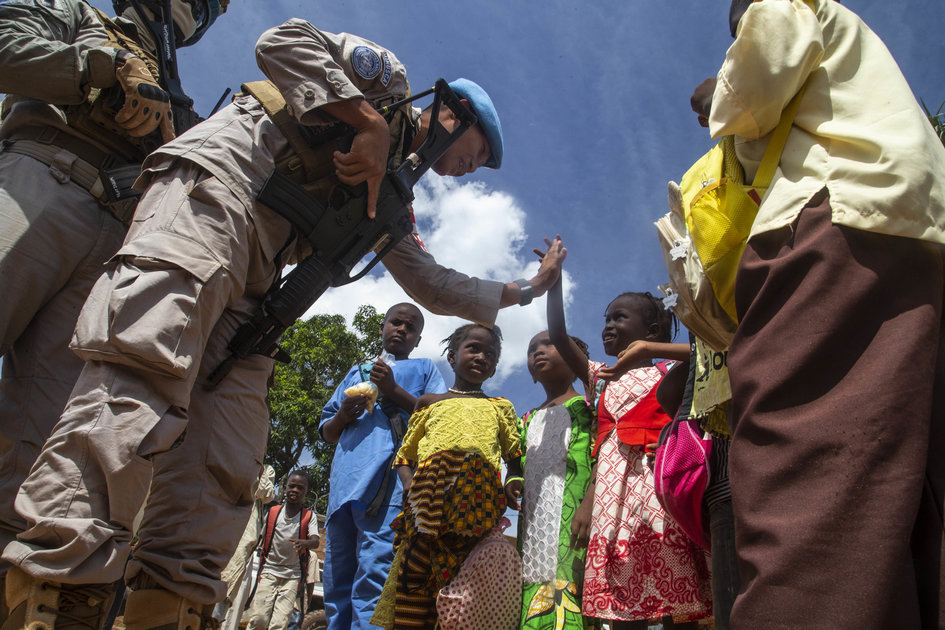 France, committed to stabilizing and strengthening the CAR authorities

From the outset of the crisis, France has been involved, both in its national capacity and within the Security Council, in supporting the return of stability and the rule of law in the CAR.

[In its national capacity, France initially deployed Operation Sangaris] (launched in December 2013) in response to the Central African authorities’ request to protect the civilian population in the face of the cycle of very serious violence, and in support of the actions carried out by MISCA and then by MINUSCA. This operation was carried out within the mandate conferred by Security Council resolution 2127 (2013) and ended on 31 October 2016. France then joined the European mission EUTM-RCA and MINUSCA by incorporating many French personnel.

France is also the only European Union country to have an embassy in Bangui (where the European Union also has a delegation). On the strength of its long-standing and close relationship with the CAR, it continues to support and accompany its elected authorities in their efforts to stabilize and develop the country sustainably. France is thus providing financial support to the CAR, as it did at the Donors’ Conference held in Brussels in November 2016, where it announced aid of €85 million for the period 2017-2019. Within the EU, in July 2014, France, together with Germany, the Netherlands and the European Commission, was behind the creation of the first European multi-donor emergency and development fund, the "Bêkou" fund, which rapidly enabled the adoption and implementation of projects in the sectors of health, food security, urban infrastructure and economic and social recovery. It has now been allocated €226 million. Lastly, France supports the CAR with international financial institutions (obtaining the completion point under the HIPC initiative in 2009 and an extended IMF credit facility, Peacebuilding Commission, etc.).