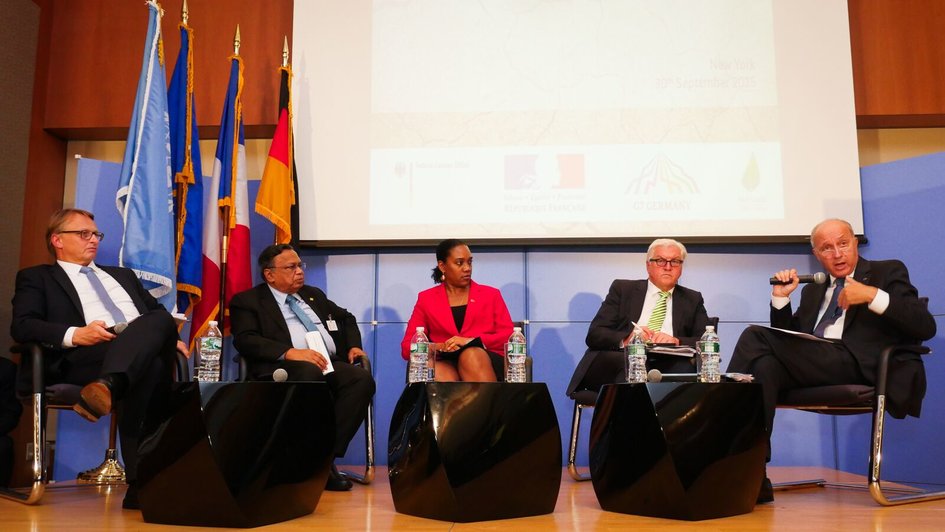 You know the story of the man who had three minutes to answer a question on the universe and the other problems. I have been said, as I have only three minutes, I will deal with a universal problem (inaudible) - your question, which is quite legitimate, makes me think about it.

First, I am struck by the fact, and this is the reason why - I pay tribute to (inaudible) to take this initiative - that when we usually discuss the question of climate, we put a focus on environmental aspects, which makes sense, but all that we have seen and all that we are thinking about show that climate change, in fact, disrupts all economic and social balances, and ultimately, climate disruption is always a security disruption. We have seen that in your country last week, dear colleague.

Just consider the movements of mass population. We have in Europe problems because of thousands, maybe hundreds of thousands of migrants, but, what about having millions, or dozens of millions of migrants if we are unable to deal with climate change.

Now, you ask me what can be done on a short-term level, what about the long-term aspect, how to have a long-term view.

First, modestly, let’s try to reach an agreement in Paris. I don’t mean because I will chair it, because the aim is to limit global warming to below 1.5 or 2 degrees. And, if we succeed, it will be a turning point. It will not solve all problems; we have listed to that with our friend (inaudible), but it will be the end of something, and the beginning of something.

But, let’s take the figures. Let’s check the figures of this morning. Do you know how many INDC we have received? 121, representing 75% of gas emissions. The record, the best figure, was in Kyoto: 15%. Now we are at 75%. It’s not enough. And you are perfectly right, we shall have to have meeting in order to have better figures and better achievements. But it’s really impressive. And if you have the four pillars of Paris: A/ a legal agreement: 1.5 or 2 degrees, B/ the IND, C/ finance and technology, because it makes a difference, and D/ what we have called the Lima-Paris Agenda or Agenda for Action, I mean, not only governmental action, but also local authorities’ actions, companies’ actions, civil society’s actions, all of that, well, it can make a difference. Therefore, first, let’s try to have a success in Paris, which is not to me and European parts to say that, about mitigation but also adaptation (inaudible) 5050. Less damage and elements which were very difficult before to deal with, which are now totally understood.

Second immediate actions - obviously it may take several forms - I will just give two examples. One, which is a German initiative, and the other one, which is a French initiative. What do we say about insurance? It is very important, we have proposed that we launch a set of meetings and we are working on that, it’s very realistic. And it could help the population. As far as the French initiative is concerned, our idea, our project, is to introduce disaster forecasting and rapid reaction measures. Because in many territories, people don’t know that a typhoon will come and therefore they cannot react. It’s not very trusty, it’s about 100 minutes. And therefore, if we are able to have long-term initiatives - and the Paris agreement is a long-term initiative - and short-term measures, I think what we are doing will be very fruitful.

Now, a third and last essential aspect. In fact, I think that the extensive use of fossil fuels has worsened conflicts ever since it became central to our economy. Why? There are many reasons. But one of the reasons is that fossil fuels deposits are very unevenly distributed. And this leads to dependency and rivalry, which are all threats to international security. And it is therefore crucial that COP21 and other initiatives should offer to developing countries, above all, the concrete means to increase energy access while developing low-carbon economies - and by that I mean in particular enhance technology partnership. Because these new technologies can be evenly distributed. And therefore, it makes a great difference. And this would considerably reduce the risk of fossil fuels becoming a great source of conflicts in future decades.

Now, recently, in order to change my ideas, I was reading a magnificent book by a famous French sociologist, whose name is Lévi-Strauss - he is very famous - a book named Tristes Tropiques. And, at the end of it, it made me think - for once -: there is a sentence along the following lines, he wrote: The world began without humans. And the very question is whether it will continue without it. And I think that this is really the heart of the issue.