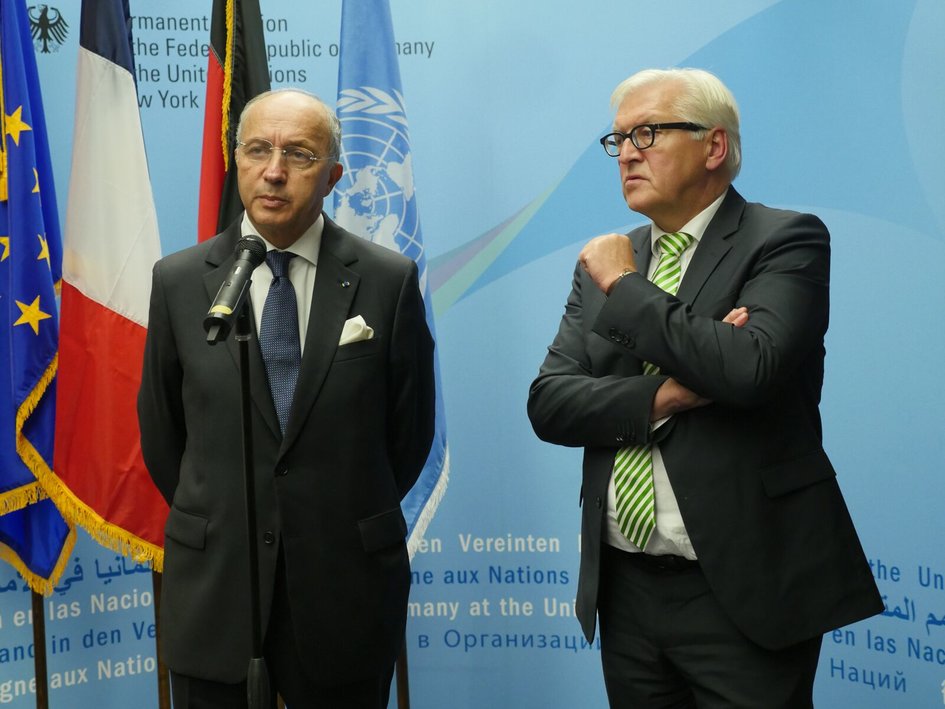 Dear Frank-Walter, thank you so much for having organized this conference, and for the permanent support that you are giving to France in order to boost the Paris Conference in December, and giving to myself, because I will have to chair this conference. We have decided to think about the relationship between climate disruption and security, because when you think about the reality of things, every climate disruption is always a security disruption.

Frank-Walter Steinmeier was alluding to the visit we made two days ago to Bangladesh. It was really impressive. Bangladesh, as far as its surface is concerned, is much less large than France, about three quarters, and it has 166 million inhabitants. And when I was there with Frank-Walter, I met an old woman, and I asked her why she was here when we were along the river, and I asked her what was her living, and she said to me:” I’m pretty optimistic, even if life is difficult”. I said: “life is difficult?” “Yes, I had to change my housing 18 times, 18 times.” (inaudible) And when it comes to general figures, the experts tell us that by 2050, up to 250 million people could be displaced because of climate change, more than the refugees that are fleeing the Syrian war. If we do not act, or if we do not act fast enough, threats to peace and security will grow in number and intensity. And that’s the real aim of Paris conference. Because at the end of the day, it has to be a turning point. Before Paris, and after Paris.

And from this account, I drew up these three conclusions: the first one is that Ministers of Foreign Affairs need to get involved. Second conclusion: we need to get an agreement in Paris that reduces the greenhouse gas emissions, but also deal with what we call adaptation. And Germany and France are very active in this domain. Germany has imagined a system of insurance, which is really very fruitful; France has imagined a system of early warning mechanism for extreme climate events. These two mechanisms, among others, could make a difference for billions and billions of people. And, obviously we need to develop low-carbon economies because this would reduce the risk of fossil fuels being a source of conflicts in future decades.

Now I have good news for you: this morning the secretariat of the Convention told me that 121 INDC have been given to the secretariat, representing 75% of greenhouse gas emissions. 75%. It’s not yet 100%, but let’s remind that for the famous Kyoto protocol, it was 15%. And now? It’s 75%. It doesn’t mean that we don’t have to do a lot of things to do in order to be successful. We are optimistic, but actively optimistic. But it means, and Frank-Walter was insisting on that a few minutes ago, that people now, specialists, non-specialists, civil society, companies, towns, governments are fully aware of the problem and most of them are dedicated to solve it. The G7 has started to work on these issues under the leadership of Germany; different forums are working on this. France obviously fully supports them. Others Ministers of Defense will convene a meeting of counterparts in Paris on October 14 to discuss this issue on security threats and climate. I think we are on the good track.