France contributes more than €500 million per year to multilateral funds.

It is the sixth-largest contributor to Gavi, the Vaccine Alliance. 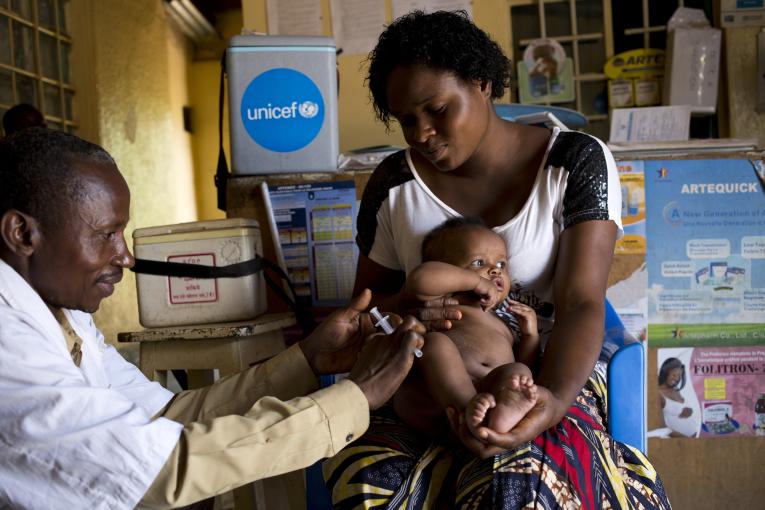 Child getting vaccinated in the DRC - 10 octobre 2018
© UNICEF /Prinsloo

The challenge remains immense, despite the progress made: these pandemics still claim the life of nearly 2.5 million people every year.

Over recent decades, France has been actively working against HIV/AIDS, tuberculosis and malaria as a mainstay of its strategy for global health. This political and financial action is reinforced by our large contributions to multilateral funds, such as the Global Fund to Fight AIDS, Tuberculosis and Malaria, Unitaid and Gavi, Global Alliance for Vaccines and Immunisation.

France is maintaining its high-level political and financial commitment to multilateral funds, contributing more than €500 million per year. It is also calling for a widening of the public and private donor base. This will be one of the focuses of the Global Fund Replenishment Conference hosted by France in Lyon in 2019.

To meet new global public health challenges and adapt to the changing international context and frameworks, especially following the adoption of the 2030 Sustainable Development Agenda in September 2015, France has adopted a cross-cutting approach. As part of this approach, it works to reinforce health systems to achieve universal health coverage (UHC) while continuing to fight disease.

Following recent health crises, such as the Ebola epidemic in 2014 and the Zika outbreak in 2016, France is helping to restructure international health security around the World Health Organization, which defends this cause.

The Global Health and Foreign Policy Initiative was launched in New York in September 2006, at the instigation of foreign ministers from Norway and France, Jonas Gahr Støre and Philippe Douste-Blazy.

Global Health and Foreign Policy, an informal consultation framework, works to address health issue at international level. As its participants are from many different regions, strong political impetus can be given to the major public health issues. After ten years of joint efforts, the group renewed its commitment to working together in 2017.

France will head the group in 2019, taking over from Brazil, the group’s chair in 2018. Every year a Global Health and Foreign Policy resolution is submitted to the United Nations General Assembly (UNGA). On 11 December 2019, the General Assembly adopted the resolution presented by the group on the theme of inclusiveness.

France has adopted a global health strategy for the 2017-2021 period which features a cross-cutting approach to global health issues.

France’s activities are based on the following principles:

• A rights-based approach; • The promotion of universal access to health, particularly by fighting all forms of inequality; • National ownership; • French attractiveness and influence, particularly in the fields of health training, research and innovation.

The strategy was developed by working with all French players in healthcare, research and development. It will help to concentrate efforts on a shared goal and four key priorities: