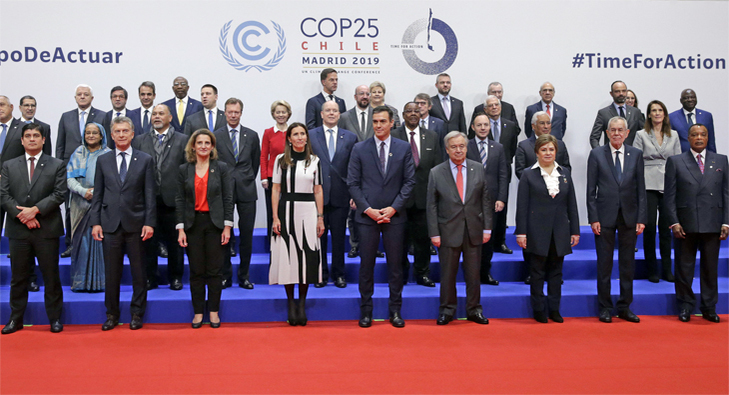 The 25th Conference of the Parties (COP) on Climate Change took place in Madrid from 2 to 15 December 2019. The French delegation was led by Prime Minister Edouard Philippe, accompanied by Minister of State Brune Poirson for the Heads of State and Government segment on 2 December. The Minister for the Ecological and Solidarity Transition, Elisabeth Borne, was present during the second week for the ministerial segment.

During her visit, Brune Poirson, Minister of State attached to the Minister for the Ecological and Inclusive Transition, signed with Alberto Moreno, President of the Inter-American Development Bank (IDB) the agreement for the creation of a new trust fund devoted to biodiversity, France contributing 24 million euros.

Press release on the creation of trust fund devoted to biodiversit

The COP25 saw important advances, notably with the establishment of the "Santiago Network" aimed at helping affected countries cope with the irreparable impacts of climate change. It also enabled the link between climate and biodiversity to be better taken into account, with the launch of a dialogue on the ocean and the cryosphere, and another dialogue on land, based on the work of the IPCC, thus enabling better recognition of the role of science. The States also agreed on a new plan of action on gender and decided to extend the agenda for action, thus giving a greater role to initiatives carried out with civil society.

Regarding negotiations, the COP did call for an increase in climate ambition during the revision of the States’ climate plans expected in 2020, but it did not lead to a decision on the implementing rules of Article 6 of the Paris Agreement, which relates to emissions trading systems. These efforts should come to fruition at the COP26 to be held in November in Glasgow.

COP26 objective: to convince States to ambitiously increase their commitments in 2020

COP26 will take place in Glasgow, United Kingdom, from 9 to 20 November 2020. It is organized in partnership with Italy, which will host a pre-COP in October 2020 in Milan.

COP26 should be the COP of ambition and action. Chaired by Mr. Alok Sharma, the UK Secretary of State for Business, Energy and Industrial Strategy, it will have to demonstrate an increase in climate ambition at the global level, on the basis of contributions determined at the national level, in accordance with the provisions of the Paris Agreement, adopted five years ago.

Indeed, in order to limit the consequences of climate change, global warming must be contained below 2°C. This is the commitment made at COP21 in Paris. To meet this objective, States must redouble their efforts. The latest IPCC report shows that the reduction of greenhouse gas emissions is not enough and that global warming is likely to exceed 3°C with irreversible consequences for humanity.

The UK Presidency also hopes to achieve significant results in the following areas:

France’s priorities for COP26 and in terms of climate change

1/ The finalization of the implementing rules of the Paris Agreement, thanks to a consensus that respects environmental integrity on carbon market mechanisms.

2/ A strong message from the international community on the commitment to achieve carbon neutrality by 2050 at the global level.

3/ The willingness to increase the nationally determined contribution (NDCs) of the European Union and major emitting countries.

4/ The strengthening of the link between climate and biodiversity.

5/ The preservation of the spirit of the Paris Agreement and its full implementation in a strong multilateral framework.

French funding dedicated to the climate

France allocated 5.08 billion euro in climate financing in 2018. A figure that meets the objectives it had set for itself in 2015 (reaching at least 5 billion euros in 2020). France also contributes to the World Bank’s climate funds, the Climate Change Adaptation Fund, the Least Developed Countries Fund (LDCF), the Multilateral Fund for the Implementation of the Montreal Protocol as well as to multiple initiatives (International Solar Alliance, CREWS initiative on early warning systems, etc.). It has also committed to the replenishment of the Green Climate Fund, doubling its contribution to the fund to €2 billion and enabling the mobilization of 28 countries to reach an historic replenishment of the fund of 9.8 billion dollars at the Green Climate Fund replenishment conference held in October 2019 in Paris.