Screening of “Women and Men” by Frédérique Bedos 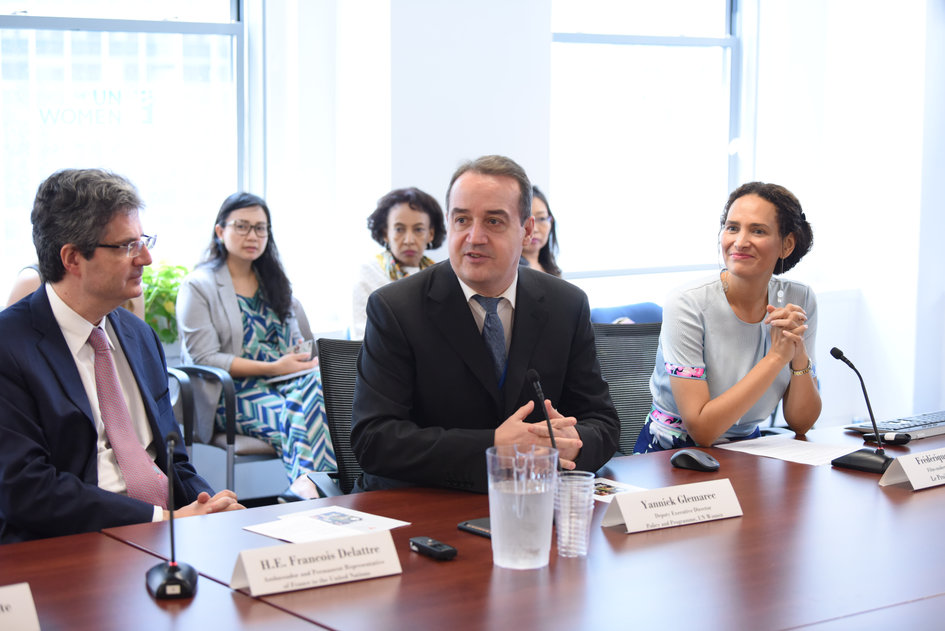 Thank you so much, un grand merci cher Yannick et chère Frédérique, A warm word of thanks to all of you for being here this afternoon but also for your extraordinary commitment to a cause that has become front and center in everything we do here at the UN and that we French strongly believe in. So it’s a great pleasure and privilege for me to be here with my team this afternoon to share this moment with you on this very special occasion indeed as we’re gathered here to see some excerpts of the very inspiring and powerful film “Women and men”, by Frédérique Bedos.

May I start by expressing my heartfelt thanks to our friend, Yannick Glemarec, the Deputy Executive Director of UN Women, not only for your warm welcome, mon cher Yannick, but also for your extraordinary leadership here at UN Women to ensure that women’s rights are indeed promoted and respected. You can try to say “No” to Yannick, you can try to say “No” to Frédérique, but to both of them you have no chance. And so I want to thank them both from the bottom of my heart. It’s a great privilege indeed to have with us and for us the visionary and extremely talented filmmaker Frédérique Bedos.

Frédérique, if I dare say, is truly a national and international treasure and she’s among other things the founder of the very important and successful NGO “Le Projet Imagine” - and I’m glad to acknowledge here, with Frédérique and her team, Le Projet Imagine whose films inspire so many people around the world to take action with respect to women’s rights. And there is one thing that I want to say about Frédérique : she’s a doer. She wants to convey a message, to convince and, all over the world she is, again, a doer.

That is a mission fully in line with UN ideals and French commitment to gender equality, which President Macron has made the priority of his mandate: “La grande cause nationale” - not “a” priority among others : the number one priority of President Macron’s mandate is to promote gender equality. I therefore want to take this opportunity to recognize the outstanding work of Frédérique Bedos and her team, whose commitment to gender equality is a source of admiration which is one thing, but also inspiration along the UN system, in my country and around the world. It’s also an opportunity for me to tell you personally how much we admire the work and commitment of UN Women. You have taken off so to speak, you have really been able to make a difference, not only here in the UN system but around the world and for that we are very grateful. You can count on me, you can count on my team, you can count on France to be on your sides to fight, because it’s a fight, for gender equality.

As you know, the effort to achieve gender equality is central to our work here at the UN and here in New York in particular. It’s not about PR, it’s not about marketing, it’s really at the very heart of all we do and for me, spending like twenty hours a day at the Security Council, the agenda of the Security Council has been reorganized to promote gender equality and gender parity. It’s also true within what I called the “Quiet revolution of the SDGs“where the gender parity is front and center. So whatever angle you take, you have become one of the driving forces of the whole UN system and the member states.

I also want to commend Antonio Guterres, the Secretary General, for his personal commitment to the cause, for launching the UN strategy on UN gender parity last year which we as France fully support. You’re too shy to say it mon cher Yannick, but 4 months ago the UN Senior Management Group achieved gender parity, and the UN’s just beginning to achieve gender parity at all levels. I am pleased to note that at the French Mission to the UN, not only full gender parity is already a reality but gender equality is at the very heart of our daily activities, in line with the feminist diplomacy that France is conducting under the authority of President Macron. This term, “feminist diplomacy” was used first by my foreign Minister Jean-Yves Le Drian and then by my gender parity Minister Marlene Schiappa a few weeks ago. So I’m a proud representative of a feminist diplomacy.

The film Women and Men that you’re about to see some excerpts is particularly enlightening in this regard. Indeed, it brings people from various backgrounds together, sharing their own vision and hope for the future, because this is a film full of hope, full of this positive energy that Frédérique is obviously made off. It shows the critical importance of hearing and expressing men and women’s voices on gender parity. It demonstrates how the problems of the world that we tackle every day here at the UN are deeply rooted in gender inequality, all of them. We simply cannot accept the continued existence of all forms of violence against women, including genital mutilation, stoning, early child, forced marriages of young girls, sexual exploitation and abuse and sexual harassment, to name just a few. The protection of women is a key priority, and the protection goes of course with empowerment of women across the world. These are in my views the two faces of the same coin. Again this is our compass, both at the Security Council and at the General Assembly, to promote women empowerment.

We must indeed create an enabling environment for women and girls, to create situations that are free of violence against women, but also free of gender stereotypes, free of gender clichés as we say in good French.

Let me conclude by saying that today’s film and discussion could not come at a better time, as we are celebrating this year the 70th anniversary of the Declaration of Human Rights, but also one year after the birth of the #MeToo movement. Because women’s rights are front and center, because women’s rights are humans’ rights, you can count on France, “toujours et partout”, to be at the forefront of international efforts and initiatives in this field to continue to defend women’s rights and gender equality. Make no mistake about it, this is a fight, this is a daily fight, we are not there yet, but if we are determined - and we are -, if we are strategic - and I hope we are -, then we’ll win this battle and will win this battle together. So again my warmest thanks to all of you and you can count on me, you can count on France and you can count on President Macron. Merci.