France and Germany have made the protection of humanitarian and medical personnel and, more broadly, the strengthening of respect for international humanitarian law a priority for their twin presidencies of the Security Council in March and April 2019.

In this regard, the French and German Foreign Ministers launched a mobilization campaign on 1 April 2019 to preserve the "humanitarian space", i.e. the ability of those who provide assistance to victims of conflicts to carry out their mission safely and effectively.

2. The Humanitarian Call for Action

On 26 September 2019, the French and German Foreign Ministers presented in New York, during an event organized by France and Germany on the Alliance for multilateralism, a “Humanitarian Call for Action”.

This Call for Action identifies concrete commitments that Member States can make to strengthen respect for international humanitarian law and principled humanitarian action, in particular to:

France and Germany encourage all States to support this initiative. The endorsement of the Humanitarian Call for Action can be formalized through a note verbale sent to the German and the French missions to the United Nations in New York.

3. The political declaration of 31 October 2017 on protection of humanitarian and medical personnel

With this declaration, States: • recognize the importance of the Secretary-General’s recommendations on the implementation of Security Council resolution 2286 ;

• agree to review their national legislation to comply with international humanitarian law, with regard to medical protection;

• agree to avoid arms transfers that could be used to commit or facilitate violations of international humanitarian law;

• call upon the Security Council to adopt measures to respond to repeated acts of violence and other acts impeding the provision of medical care in armed conflict and to include this issue in the mandate of peacekeeping operations;

• agree to review their national military doctrine to include the protection of medical mission in the planning and conduct of their operations.

France encourages all States to support this initiative. The endorsement of this political declaration can be formalized through a note verbale sent to the French mission to the United Nations in New York. 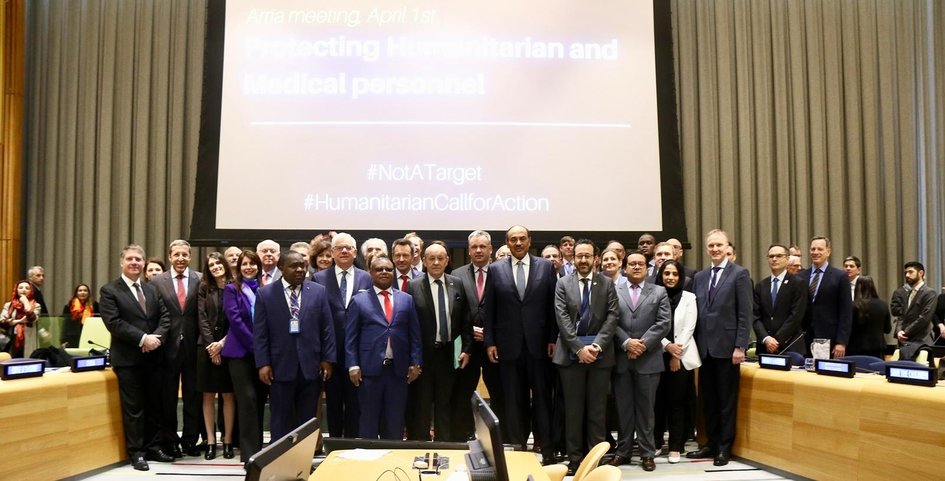 Group photo of States which endorsed the declaration on the protection of humanitarian personnel, including Minister Jean-Yves Le Drian
© FranceONU /Mylaèle Negga