Taking Action on the Risk of Famine [fr]

“Responding to the Secretary General’s Call to Action on the Risk of Famine in the conflict- affected areas of Yemen, Somalia, South-Sudan and Northeast Nigeria”

The session is open to the press 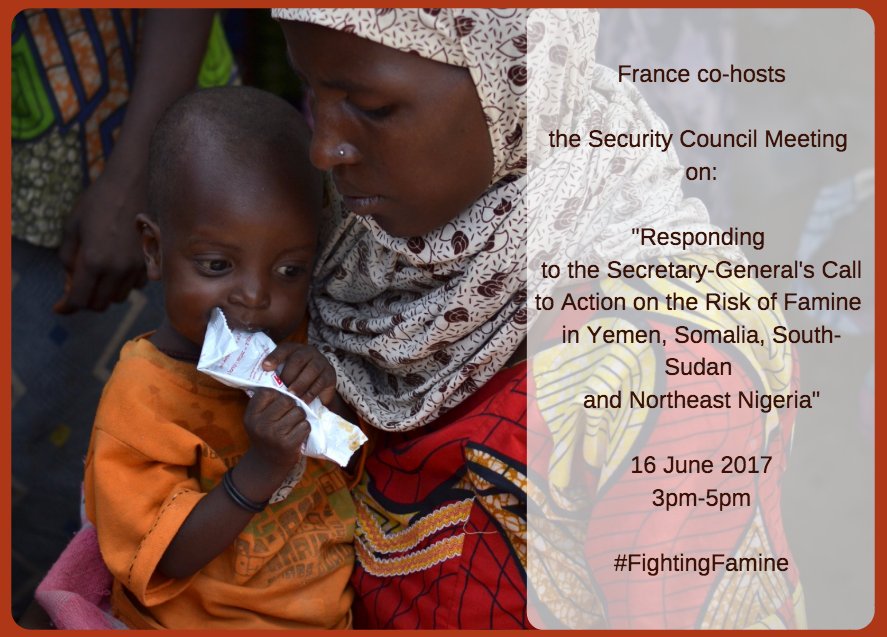 In late February 2017, the Secretary General rang the alarm bells – unless decisive action was taken, and additional resources mobilized immediately, the world could face a global food security crisis, with an acute risk of famine in four countries: Yemen, Somalia, South Sudan and Nigeria.

Two weeks later, on 10 March 2017, the Emergency Relief Coordinator, Stephen O’Brien, gave a briefing to the Security Council on his missions to Yemen, South- Sudan, Somalia and Kenya and on the Oslo Conference on Nigeria and the Lake Chad Basin region and noted that this potentially was the worst humanitarian crisis since the end of the Second World War. Since then, where robust response has been feasible, we have seen positive change. However, without sustained access and funding, the situation could deteriorate rapidly.

Famine has been formally declared in parts of South Sudan, and it is also estimated that northern Nigeria, Somalia and Yemen are very close to crossing the famine threshold. Access constraints and insecurity continue to hamper the response, both in the short and medium term. An elevated risk of famine persists in the north-east of Nigeria, where famine may have already occurred. Some areas remain inaccessible to humanitarian organizations, leaving affected people in life-threatening conditions. Some 100,000 people are already facing famine in South Sudan, while 1 million people are on the brink. Due to consecutive and severe droughts, the risk of famine persists in Somalia, especially in agro-pastoral areas of Bay and Bakool and the Northern Inland Pastoral livelihood zone. Yemen is facing the largest food insecurity emergency in the world. The situation in all four countries also constitute a major protection crisis. Women and children are often particularly vulnerable and particularly hard hit.

This food security crisis is closely linked to conflict, fragility, insecurity and extreme poverty. All four countries are affected by conflict which impedes livelihoods, access to markets, and creates widespread displacement. Violence and conflict have also contributed to hinder an effective humanitarian response and more robust early engagement by longer-term development actors – in all four countries humanitarian and development partners struggle with access constraints due to conflict, violence and insecurity. More needs to be done. There is an urgent need for more humanitarian financing , there is a need for earlier and more robust engagement by development actors, there is a need for greater respect for International Humanitarian Law, and there is a need for humanitarian-development-peace communities working together in a well-coordinated manner to address these situations in a smart, innovative and complementary way.

Most importantly, there is need for political solutions and a stop to the access constraints that now prevent a strong short-term humanitarian response and a robust development engagement.

This Arria Formula meeting will provide an opportunity to assess the humanitarian situation in the four countries four months after the Secretary General’s call to action to avert famine in Yemen, Somalia, South Sudan and northern Nigeria and be briefed on the ongoing humanitarian and longer-term efforts to respond. It would also provide an opportunity to identify concrete measures that the Council, its members, the broader UN membership and the whole UN system could take in order to facilitate a more robust response and more effective relief efforts.

The session will be open to all Member States, civil society organizations and the media, and will feature:

• Franck Bousquet, Senior Director of the Fragility, Conflict and Violence Group of the World Bank Group