Three quarters of a century later, where does the United Nations stand?

The multilateral system and the United Nations are currently facing a paradox: they have become central in international relations - the UN is today a doubly universal organization, which welcomes all the States of the world and deals with all topics - , but they are deeply questioned by certain actors. The rise across the world of nationalist policies that reject global cooperation, of which the United Nations is the quintessential embodiment, threatens the legitimacy and scope of the organization.

The coronavirus pandemic and the ensuing health and economic crisis have presented additional challenges for the United Nations, which has had to deal with the "worst global crisis" since World War II, according to Secretary-General António Guterres. It presents a serious risk for millions of people who have been made vulnerable due to the pandemic: food crisis, worsening inequalities, weakening of health systems...

75 years of success but decades of challenges ahead

Unlike its predecessor, the League of Nations, which dissolved after 27 years of existence without having succeeded in avoiding a second world war, the United Nations has, throughout three quarters of a century, been able to deal with and resolve many challenges, threats, and crises: the Cold War, decolonization, hundreds of conflicts around the world and four pandemics. It has grown from 51 to 193 member states, has developed 38 funds, programs and specialized agencies, and launched 71 peacekeeping operations over all continents. These successes have been rewarded with 12 Nobel Peace Prizes, the latest of which was awarded this year to the World Food Program. 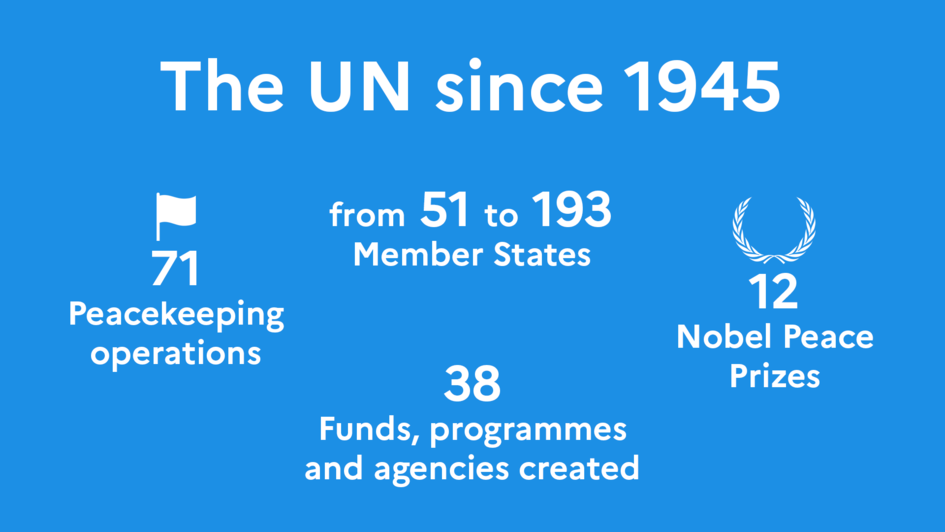 In addition to this, the Covid-19 crisis could actually mark a renewal of multilateralism. Indeed, it is impossible for all the countries in the world to act in a unilateral and isolated way in order to face global challenges such as a pandemic, an economic crisis and an ecological crisis, which do not take into account man-made borders. It is only through multilateral dialogue and international cooperation that concrete solutions can be found to face these global crises.

“Our shared home is in a mess, just like our world. Its foundations are being eroded and its walls are cracking."

Despite the accomplishments of the UN, these words of the President of the French Republic Emmanuel Macron describing the current situation of the UN remind the organization of the challenges it faces and will have to solve in the future.

This is why, on the occasion of this 75th anniversary, the UN General Secretariat has decided to launch the UN75 initiative: Shaping our future together, which aims at establishing a global dialogue that will examine the main priorities of our time look for ways to build a better future for everyone.

The United Nations has set up a platform and a survey to allow anyone who wishes to make their contribution to this vast inclusive global debate.

To celebrate the 75th anniversary of the UN, here are 10 unusual information or historical anecdotes about the organization:

1) The latest Member States to join the United Nations are Switzerland (2002), East Timor (2002), Montenegro (2006) and South Sudan (2011). The Organization also recognizes non-member observer states, the Holy See and the State of Palestine, and non-observer non-member states, the Cook Islands and Niue.

2) During the first peacekeeping operation in 1956, during the Suez Crisis, the UN hastily decided to paint the helmets of its soldiers with spray cans the same blue as its flag in order to distinguish them from the other soldiers. The symbol of the blue helmets was born!

3) There are six official languages at the UN: French, English, Spanish, Arabic, Russian and Chinese. However, only two of them are working languages: English and French.

4) The headquarters of the United Nations were established in New York, but the Organization did not move into the present buildings until 1952. The Security Council first met in London. Paris, for its part, hosted the General Assembly in 1948 and 1951 at the Palais de Chaillot.

6) The absence of a permanent member of the Security Council does not de facto block the adoption of a resolution, its representative must formally vote against it. This is how, in the summer of 1950, when Russia was practicing an empty chair policy, the Security Council adopted a series of resolutions authorizing an armed intervention in support of South Korea, in the face of the invasion of its neighbour to the north.

9) The UN has had 9 Secretary-Generals so far: four European nationals, two Asian citizens, two coming from Africa and one from South America.

10) The UN is present in popular culture, notably in the movies North by Northwest by Alfred Hitchcock, but also in Superman, Transformers, Captain America and even The Rescuers.