The United Nations General Assembly came into being with the creation of the UN by 51 states when the organization’s Charter was signed in 1945. Comprising of 193 member states, the General Assembly is the United Nations’ representative and decision making body. All states dispose of the same voting and speaking rights in this unique body of dialogue and exchange.

The General Assembly is the most representative body of the United Nations: it is the only one in which all UN member states are represented and carry out the decision making together. The General Assembly’s role is to evaluate and vote on recommendations relative to the international questions for which it is competent. A sovereign organ within the United Nations system, it makes decisions according to a single majority vote – except for decisions on major issues in which case consensus is favored. Each member state has an equal voice. A central body, it approves the UN budget, the UN Secretary-General’s nomination and elects members of other councils and bodies.

The General Assembly makes decisions which have the power to improve the lives of millions of people. For example, in 2016, it adopted the Sustainable Development Goals (SDGs): seventeen fields of action for which the international community is to mobilize to achieve concrete results by 2030. Eradicating poverty and famine, promoting gender equality, investing in education… such ambitious objectives carried by the General Assembly to improve the human condition and protect our planet.

The General Assembly gathers in the largest room of the United Nations’ main headquarters in New York, which is dedicated to its purpose. This room is coiffed by a dome and divided into three floors. Each member state disposes of a seat on the ground floor. Observers – organizations which have the right to sit but not to vote – have dedicated seats on the first floor. The second floor is reserved for the public. 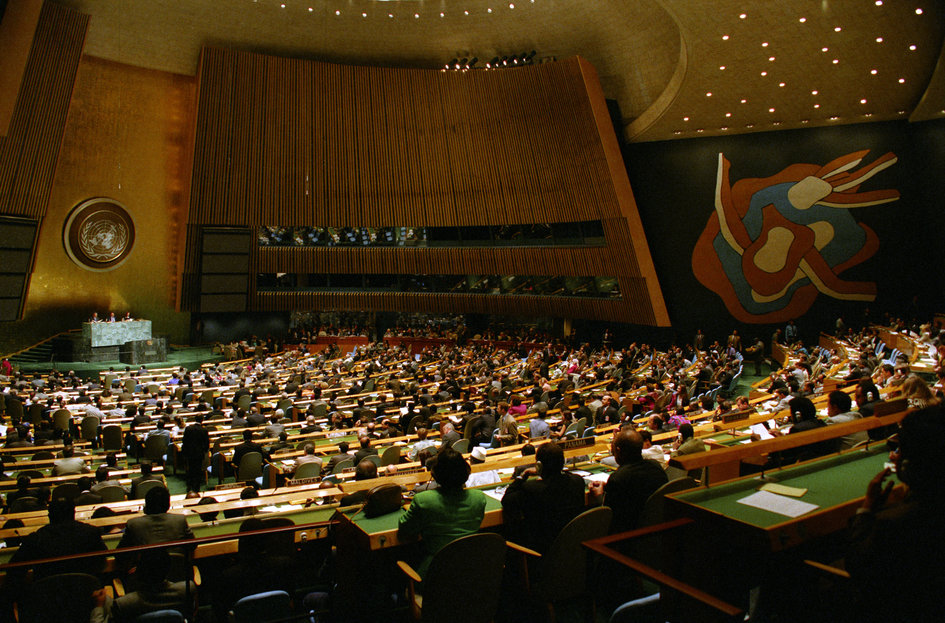 Member states’ seating positions change each year for reasons of equity. A podium allows speakers to deliver speeches in front of the room and the speeches are shown on two huge screens – with a live retransmission on the UN television channel. Behind the podium sit amongst others the UN General Assembly’s President and the organization’s Secretary-General.

Each year, the member states’ delegations gather in this room to examine topical questions for the international community. This session opens with a high level week attended by heads of states and government, as well as a number of ministers. Heads of state and government make a speech in front of the General Assembly in order to put forth their priorities for the coming year. This week is also punctuated by a high number of meetings, conferences and bilateral meetings.